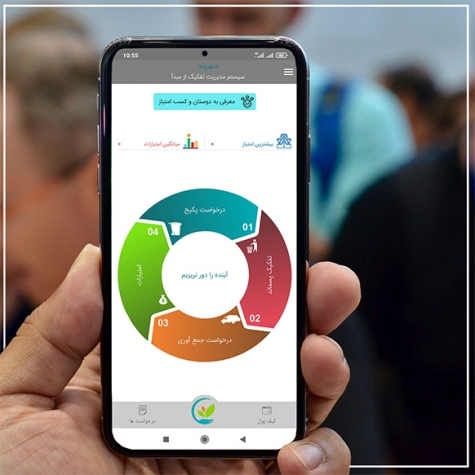 The meeting was conducted with the aim of introducing the recycling application in the presence of Mr. Mehran Hallajian, managing director of the municipal solid waste management of ramsar and managing director of the Sabzzivar. Mr. Hallajian by pointing out that during the time, the matter has always been important by holding several meetings, it has been concluded that with minimum facilities, we have done the preliminary works in order to reduce the consequences .In spite of the fact that such projects do not have economic justification at the short time, it was decided to conceded the recycling program to Sabzzivar company. The amount of waste is reduced about 20-25 percent by the implementation of the plan.

The mayor of Ramsar, in reference to the last five years of the previous year, according to a good resume that Sabzzivar left behind, conceded a new 5 year contract to that company for the program of collection and separation of waste from the source.

He also pointed out that despite the outbreak of corona virus, a cautious but powerful function an application was designed and created by Sabzzivar, in addition to the city's surface area connexes, so that citizens could have garbage segregation based on the city 's garbage analysis .

Mr. Afshin Heidrkhani in this meeting by welcoming the new ideas, considered the collection and segregation by using the application as a new idea .He mentioned:  in order to create a culture of any work in the society, we should bring the people together and hope that with the help of the media, the plan will be successful. The aim of implementation in Ramsar was to change people's pattern of consumption in order to lead people to consumption and quality, reduce waste production, help environment and create sustainable income and application of waste separation from source is well designed for these purposes. But because of the global involvement with corona, it could not be introduced all of the qualities of this applications .He continued: however, with the help of the municipality, we will achieve the objectives in order to reduce waste generation.